This game has its own dedicated wiki project. 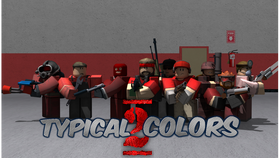 Typical Colors 2 is an FPS game created by the ROLVe Community on December 5, 2015.

The game is based on the Valve FPS shooter game Team Fortress 2.

(Some of these maps are removed)

RED has to defeat bosses (who are on the GRN team). Bosses are custom classes with superior health, damage, and superpowers.

The same as King of the Hill but only melee weapons and certain primary and secondary weapons are allowed.

GRN must escort a cart holding an explosive through a series of checkpoints and into the RED's base within a certain amount of time.

Like TF2, you must capture 3 briefcases to win the game.

King of the Hill

Keep your ground at the control point until the time runs out.

GRN must capture 2 control points within a certain amount of time while RED stops them.

Retrieved from "https://rolve.fandom.com/wiki/Typical_Colors_2?oldid=5403"
Community content is available under CC-BY-SA unless otherwise noted.